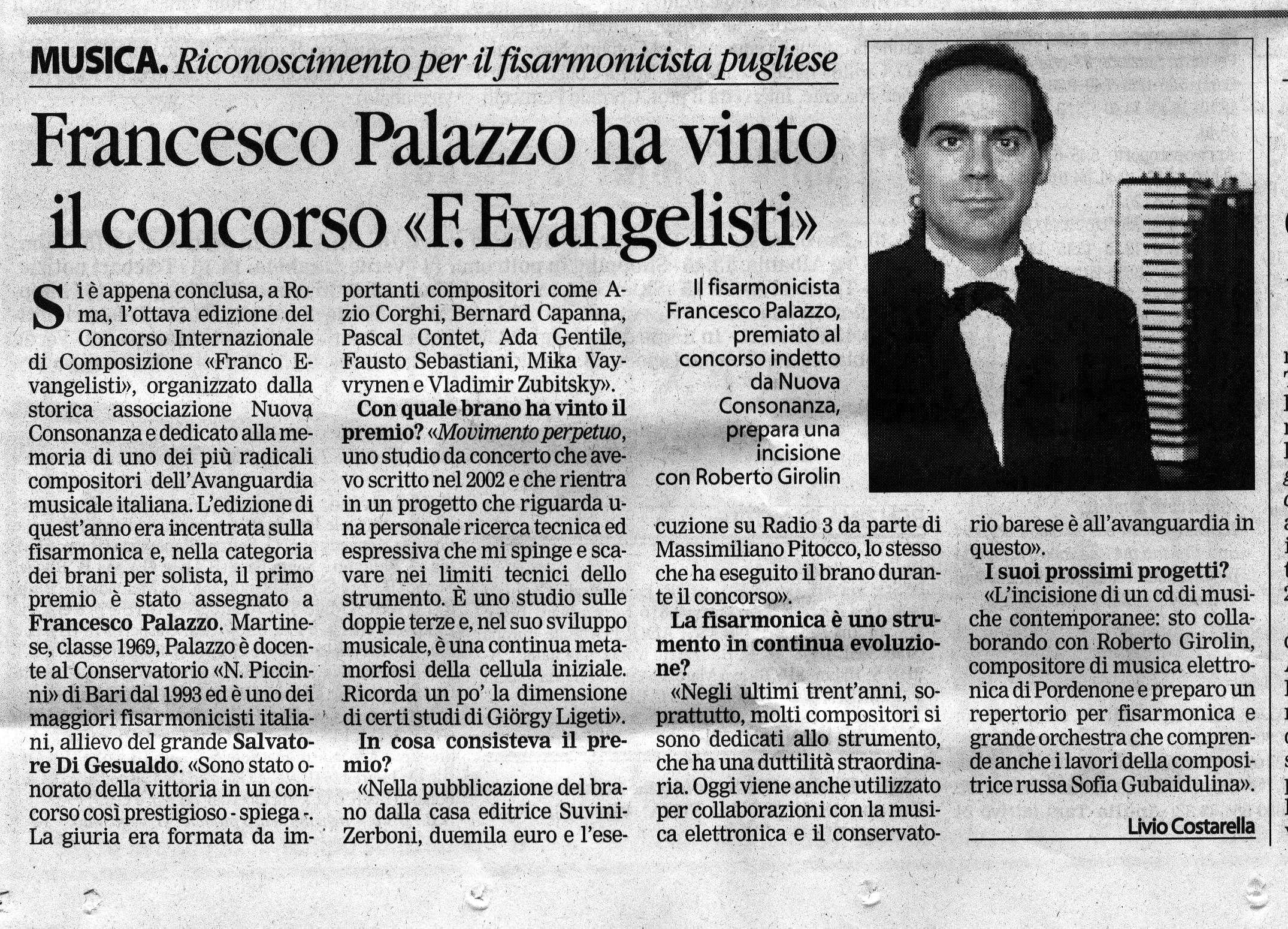 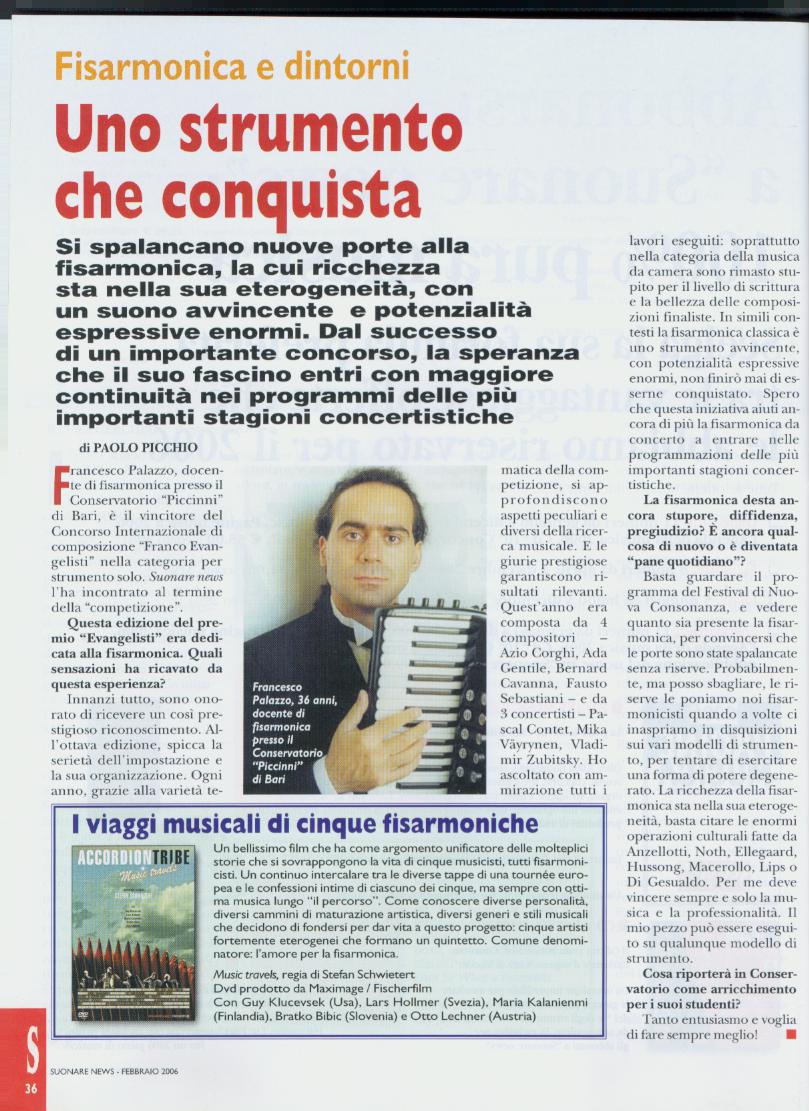 “Those at mass were able to hear Francesco Palazzo’s performance of Sofia Gubaidulina’s accordion work, De Profundis.
Mr. Palazzo brought out the inner intensity of the work, which though uncompromising in its harmonic language, communicated directly with a powerful dramatic integrity.” .
(J.D. Hixson , founder and Artistic Director of STUDIO for New Music -NY-)

Review by James P. O’Brien :
1-3. J. S. Bach (1685- 1750) Die Kunst Der Fuge BWV 1080 (11:13)
1 – Contrapuncto No. 1: This is baroque through and through, a wonderful prelude treatment of the Bach transcription with unfolding melodic lines tastefully performed. The voicing of the accordion is highly reminiscent of a period organ. (4:43)
2 – Contrapuncto No. 2: This is a familiar Bach melody as well with a rhythmic lilt handled consistently and musically by the performer. If one were not looking at the CD jacket with an accordion photo on it, one might think this had been recorded in a small German cathedral on a small Baroque organ. (3:15)
3 – Contrapuncto No. 9: Similar to the above, this is melodically more florid but equally as musical and stylistically correct. (3:15)
4-5. J.S. Bach BWV 565 (9:23)
4 – Toccata in re minore: Beginning with the adagio section, this popular and well known toccata (thanks to Stokowski and Disney) moves to the prestissimo and flamboyant section as anticipated with clarity and precision. (3:07)
5 – Fuga in re minore: Clarity and balance of melodic lines with marvelous terraced dynamics round out these tasteful transcriptions from J.S. Bach. (6:16)
6-9. Cesar Franck (1822- 1890): Prelude, Fugue et Variation (10:05)
6 – Prelude: A lyric melody is heard over an arpeggiated accompaniment in slow tempo (Andantino cantabile), gradually unfolding. Dynamics are sensitively treated here, demonstrating how clear the accordion can be in soft passages.(3:33)
7 – Lent: Bold chords initiate this brief transitional section, rich and sonorous. (0:41)
8 – Fugue: The fugal subject is introduced, echoed then in subsequent upper voices, and finally heard in a pedal register. The contrapuntal lines weave, alluding to the subject periodically. There is a brief cadenza-like passage over drone, with restatement of the subject in all voices. This is a non-goal oriented fugue; it simply floats gently instead of marching inexorably to a gigantic denouement. (2:44)
9 – Variation: Commencing with a melody from the prelude over drone, it is highly reminiscent of the prelude, rounding out the ternary form of the entire work. The entire pitch spectrum of the accordion is nicely featured here. (3:07)
10 – Felice Lattuada (1882-1962): Improvviso (6:08)
This composition was written in the 1950s for an instrument with Stradella bass but was edited in the 1980s by Salvatore di Gesualdo for free-bass (as were the next two compositions as well). The composition features a lyric melody in homophonic texture free of functional harmony. The melody is slow and ornamented; the harmony, decorative and coloristic with only a hint of dissonance (and even a bit jazz-like at times). This is ternary, with middle section senza battuta. (6:08)
11-Franco Alfano (1876-1954) : Nenia (7:59)
Of the same 1950s school, this work is somewhat impressionistic, with an elaborate melody over a bass line that moves up or down by semi-tones. One could imagine this is being improvised. A middle section features a simpler melody over lush, highly coloristic chords. This is charming but pretty much devoid of musical content beyond tone color. (7:59)
12 – Luigi Ferrari-Trecate (1885- 1964): Pantomima umoristica (4:29)
This brief work is dissonant and sardonic in a manner which reminds one of Prokofiev or Kabelevsky; spritely, playful and masterfully crafted, including the slow middle section. (4:29)
13-15 Sergio Callegaris (1941 – ): Preludio Corale e Finale (7:36)
13. Preludio is restless and dissonant, slow and lugubrious, unfolding as exploration of sonority and timbre, rather than of melodic development. (3:26)
14. Corale is sensitive, tranquil and coloristic. The modal influence of all three movements is most apparent here, drawing on chromaticism of the post- Impressionistic style. (2:43)
15. Finale is wild and highly technical, concluding the entire set with a virtuosic tour de force. (1:27) (The composer of this set, of Argentine origin, was influenced by late Romanticism with its extreme chromaticism and coloristic, non-functional harmony.)
16 Bruno Bartolozzi (1911- 1980): Madrigale di Gesualdo (9:24)
This work was written in the 1970s and, with the exception of the Bach, is one of the more interesting contemporary pieces on this album. Featuring pitch planes sounding against one another at great distance (extreme high versus extreme low), the result is surrealistic and expressionistic. There are only hints of a melody here, much like the pointillism one associates with 12-tone music. The dynamic contrasts provide much interest to the listener as well. The piece is dedicated to the accordionist, Salvatore di Gesaldo, who was named for the great madrigal composer of the late 16th and early 17th Centuries in Italy.
17 Sofia Gubaidulina (1931 -): De profundis (12:14)
Written for Friedrich Lips in 1978, this work was influenced by Psalm 129. It begins with a dark and somber feeling, which is not really mitigated until a melody emerges above the omnipresent tonal masses. This is quite foreboding, but does moderate near its conclusion with a high, rather angelic melody. This is technically demanding, but is stronger on effects than on expression.

Summary (Total time: 78:51) As stated in the CD jacket: “The strongpoints of the new Italian classic accordion school are due to its drawing from the old ‘keyboard’ literature.” Thus, this CD begins with selections from The Art of Fugue, ” …not composed for just one particular keyboard instrument in mind, but a whole range, including the organ, harpsichord, virginals, regal, piano and … the accordion!” The jump from the baroque era to the Twentieth Century is bold, showing how different the craft of composition was then as compared to now. Melody was inherent and the interplay of contrapuntal lines integral to the fabric of music. By contrast, the Twentieth Century examples seem a bit blatant, using tone color, harmony and effects, but little else to provide musical interest. Technique by itself is not impressive over time, yet most of these new school pieces rely heavily on technique. The reviewer had a hard time sorting out one composition from another, since they all used the same effects. The New Italian School might be better served considering the merits of melody and melodic development to provide interest as well as the contrast among various types of texture. Great music, as with Bach, depends on the balance of all musical elements, not just a few. And a free-bass accordion can obviously provide wonderful melodies in the left hand with octave displacement to contrast with the right- hand. It would have been nice to have heard more.

Francesco Palazzo was born in Martina Franca in 1969 and has impressive credentials, including a diploma (1994) from the Cherubini Conservatory of Florence. He has designed a new concert accordion which he believes is ” … more in line with the renewed artistic requirements …” of the new Italian School. This CD admirably demonstrates this. Palazzo is a consummate master of his instrument. He presently teaches accordion at the Piccinni Conservatory of Bari, a position he has held since 1993, as well as sustains an active concert presence. 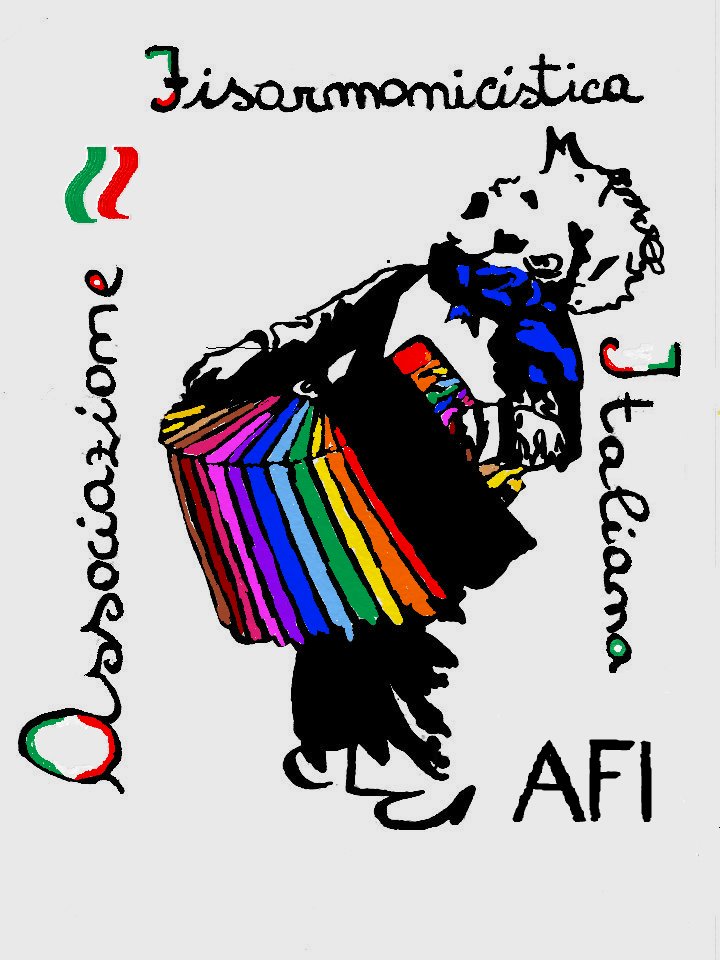